Twice As Good is the professional name of the music duo formed by Paul Anthony Steward (Son, born 1984) and Richard James Steward (Father, born 1951) from Clearlake Oaks, CA. Pomo Indians of the Elem Indian Colony. Richard had grown up around music all his life, learned to play guitar and sing. He mostly admired the Blues & Soul. When Paul was a young teenager, Richard taught Paul to play guitar, encouraging him to be a Lead Guitarist. Paul, inspired by B.B. King began imitating the Electric Blues Guitar he heard on the radio and CD's, also practicing his vocals. Paul & Rich had played around with various bands in the beginning, gaining exposure and experience, but in May 2003 they debuted as "Twice As Good, 2XG" at Terry's Southern BBQ in Santa Rosa, CA. Since then they have been all over the the USA, released 3 albums, shared the stage with many legends and famous artists, and continue to garner success and praise with Paul leading the band through flashy show tunes, with soulful vocals, screaming guitar, and unbelievable stage presence.

The name "Twice As Good" isn't a claim of status. To Paul & Rich it is a dedication to hard work and quality of craft. About believing in one's self, not being shy, and having the courage to try something as hard as becoming a successful professional musician. They were told, "you can't make it in the music business, you got to be twice as good". They replied, "well all right then. We will be, Twice As Good".

Paul Steward-(Vocals, Lead Guitar, Keyboards, Sax, Harmonica, Trumpet, Ukulele) is also a Pomo Indian and member of the Elem Indian Colony Tribe. Paul had music around him all his life through his Father and family but only began playing guitar in his mid-teens. His Dad taught him his first chords and tricks then told him “you learn the rest” so he began copying the guitar solos and leads of B. B. King and of Wayne Bennett on some old Bobby “Blue” Bland tunes. In High School, Paul rose to prominence in his school jazz band earning awards and praise that led to a music scholarship to the University of Nevada, Reno. Paul enrolled and began attending classes at UNR, but after a semester he decided for the time being to continue his education back home at the Santa Rosa Junior College. One of Paul's aspirations is to become a music teacher. Paul also plays Harmonica, Keyboard, Trumpet, Ukulele, Mandolin, Banjo, Violin and Saxophone.

Since 2003 he has performed as one half of Twice As Good with his father, he has jammed with many great artists and musicians, picking up pointers and skills on the way, directed the band when 2XG backed up a Temptations tribute group doing all the classic soul, then a year later, directed a country music tribute of 3 great country stars, Garth Brooks, Shania Twain, and Charlie Daniels, also laying down some smokin' guitar solos during each one of these shows. In May of 2007 Paul Steward got to jump on stage with Robert Randolph & The Family Band at the Wells Fargo Center, Santa Rosa, and jam. The crowd was amazed and Paul was said to have smoked Robert and Family, all in good fun. Then in August of 2008 Twice As Good joined with their friend Charlie Musselwhite on stage to headline the Blue Wing Blues Festival at the historic Tallman Hotel and Blue Wing Saloon/Cafe of Upper Lake, CA. He is currently working on and studying Gospel music, as well as performing on occaison with an amazing Bay Area Gospel group called The Kingdom Travelers.

Whether he's diving off stages, doing the splits, or dancing his way thru the audience you'll usually catch a big smile on his face as he is out not only to create great music but also to entertain.

Rich Steward-(Vocals, Rhythm Guitar) is a Pomo Indian and a member of the Elem Indian Colony Tribe of Lake County, California. Self taught and trained over the years by playing in several unknown bands in numerous honky tonks and dives throughout Northern California. A life-long fan of Blues and Soul he passed that passion along to his son.

Of noteable mention, he did make friends and hang with the great Blues Guitarist Luther Tucker, back when Tucker was gigging and living in the Bay Area. Rich's style of rhythm guitar is based from the old Blues/Jazz style of comping, inspired by the legendary Matt "guitar" Murphy. Hence, the SG guitars. Rich is also known as "Daddy Rich" or "The Father of The Blues". . 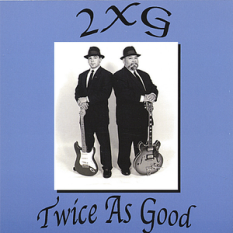 🤗 Where can I find materials for the query "Twice As Good"?

You can find information through the best music search engine - Muzlan.top 😊All materials on request "Twice As Good" are available on page Twice As Good

🤗 Is it possible to listen to tracks on the site on request: "Twice As Good"?

Yes of course. You can listen tracks on the page Twice As Good

🤗 Is it possible to download tracks on query "Twice As Good"?

Yes of course. You can download tracks on the page Twice As Good