Ayumi Hamasaki (浜崎 あゆみ, Hamasaki Ayumi?, also 浜崎 歩) (born October 2, 1978) is a Japanese singer-songwriter and former actress. Also called Ayu by her fans, Hamasaki has been dubbed the "Empress of Pop" due to her popularity and widespread influence in Japan. Born and raised in Fukuoka, she moved to Tokyo at fourteen to pursue a career in entertainment. In 1998, under the tutelage of Avex CEO Max Matsuura, she released a string of modestly selling singles that concluded with her 1999 debut album A Song for XX. The album debuted atop the Oricon charts and stayed there for four weeks, establishing her popularity in Japan.

Because of her constantly changing image and tight control over her artistry, Hamasaki's popularity extends across Asia; music and fashion trends she has started have spread to countries such as China, Singapore, and Taiwan. She has appeared in or lent her songs to many advertisements and television commercials. Though she originally supported the exploitation of her popularity for commercial purposes, she later reconsidered and eventually opposed her status as an Avex "product".

Since her 1998 debut with the single "Poker Face", Hamasaki has sold over 50 million records in Japan, ranking her among the best-selling singers in the country. As a female singer, Hamasaki holds several domestic records for her singles, such as the most number-one hits, the highest sales, and the most million-sellers. From 1999 to 2009, Hamasaki had at least one single each year top the charts. Hamasaki is the first female singer to have eight studio albums since her debut to top the Oricon and the first artist to have a number-one album for 11 consecutive years since her debut.
. 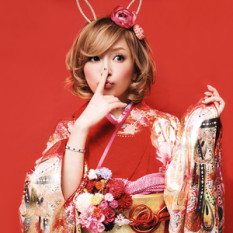